There is a mystery too deep for words;
the silence of the dead comes nearer to it,
Being wisest in the end. What word shall hold
the sorrow sitting at the heart of things,
The majesty and patience of the truth.
Silence will serve; it is an older tongue:
The empty room, the moonlight on the wall.
Speak for the unreturning traveller.
-John Hall Wheelock


I often find that once I have finished creating an art piece that I find much more meaning there then I originally intended or realized. Much of the time I have an image that I want to create in reality, but don't always question the purpose behind it. 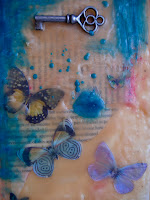 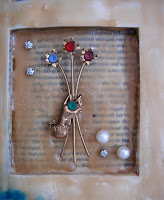 With this altered book I started out by using objects I had found in my Nana's house after she died. As I placed them in the book I was working mostly based on aesthetics. But as I continued the objects and images used became much more pertinent. I have created a book that cannot  be read. To me it speaks to dealing with the death of a loved one, the questions they can never answer, the conversations you will never have.

There is no more opportunity for their stories to reach you, and yet they live on in the stories you tell each other. Through remembrance we create a window, a way of holding that person close and unlocking some aspects of who they were from other's recollections.
Butterflies are often regarded as a symbol of transformation, of transcendence. Keys a symbol of revealing, unlocking and opening. yet a closed book keeps us out, hints that there is more but does not allow us to see what is there.