As with a lot of my art, I find that the idea for this altered book came before I figured out the reasoning behind it. That usually comes later after the piece is finished and I find myself wondering what to say to people when they ask "..but what's it about?" Once  I can step back and really look at it, I often find I have put more into something then I originally intended or even thought about as I was creating it. But when I do get an image that I feel I have to create before it has time to slip away, I generally don't question it in depth. Some more thoughts on this particular piece can be found here.

I have had a long standing attraction to the altered book as an art piece, probably because I've always been a pretty bookish person in general. Libraries and book stores have always been one of my favourite places to visit and combining books with art just seems like the natural progression. 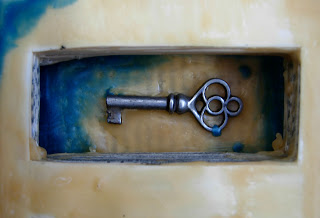 Altered book art is altogether fascinating. Not only are the options seemingly infinite for ways to work with paper and books but it is also intriguing to me partly because of the stigma that surrounds the act of altering, and thus destroying in some sense, a book. I haven't made very many altered books myself but even when I started on this project I had a tough time going ahead and doing it. Even though it was a damaged book that I would never be tempted to read, I was treating it like a sacred object.

In an age where information is now so readily available, perhaps it seems strange to hang on to this idea of the book being the single, authoritative source for knowledge. There is an illusion that simply because something has been put into the printed word that it is also the valid place to obtain information. Especially when the internet has so many varying opinions that are readily accessible, it is tempting to hold onto this view...

Perhaps this is where that stigma around destroying books comes from, and yet I have none of the same qualms surrounding other sources of information such as cds, dvds, etc. Books are special. There are piles sitting in my basement that I can't bear to get rid of, even if I may not read them again. My shelves are overflowing with books from my childhood that I've practically memorized and others that I plan to read–eventually. As soon as I finish the five I'm working on now.

I love the altered book because it offers a transformation for those books that are a hard to let go of, but I know I won't continually return to. It gives them a new life, a new purpose, and a new medium to say something different while still retaining that memory of what it once was.

“Once you have tasted flight, you will forever walk the earth with your eyes turned skyward, for there you have been, and there you will always long to return.”
― Leonardo da Vinci
Posted by Shauna at 1:00 PM No comments: